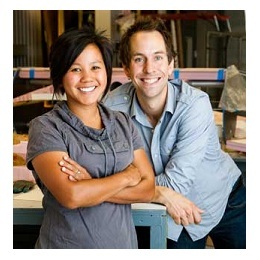 Directing the action of Design Squad Nation are mechanical engineers Judy Lee and Adam Vollmer. As a child growing up in Cary, North Carolina, Judy loved taking things apart to see how they work. With the support of her family (her dad is a civil engineer), that love eventually led to a mechanical engineering degree at North Carolina State University. Prior to her work on Design Squad Nation, Judy was profiled on WGBH’s Engineer Your Life and will appear in an upcoming segment of NOVA’s Secret Life of Scientists and Engineers Web series. Judy now works at her dream job as a product designer at IDEO, an international design and innovation firm in Palo Alto, CA. Growing up in Portland, Oregon, Adam wanted to be an astronaut, a LEGO engineer (before he knew what an engineer was), or…a dinosaur hunter. Thanks to a BS in mechanical engineering at Stanford and a MS at MIT, Adam has been able to do most of these things and more. “I played with LEGOs all the way up through grad school. I worked with NASA during the filming of Design Squad Nation. But I’m still on the lookout for dinosaurs. I hope to find one soon.” Adam is currently a mechanical engineer at the international design and innovation firm IDEO in Palo Alto, CA. If you would like to see a preview of the show, we have an embeddable clip on YouTube at http://www.youtube.com/watch?v=xtTowE8NL10