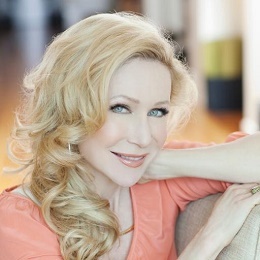 Kellie Olver is an internationally recognized television host. With over 20 years experience, logging over 22,000 hours of LIVE TV and generating nearly ¾ of a BILLION dollars in sales, Kellie has been transforming lives around the world. Because of her dynamic personality and contagious enthusiasm she has been consistently ranked number one as a television host, professional speaker, and trainer, teaching people how to present themselves, idea or product for maximum results.
She has been a host of two national shopping channels, Home Shopping Network (HSN) USA and The Shopping Channel (TSC) Canada. She has worked with top celebrities such as Joan Rivers, George Forman, Richard Simmons, Joan Collins, Tony Little, Susan Lucci, Wayne Gretzky, Steve Garvey, Wolfgang Puck, Liza Gibbons, Mr. Blackwell, Connie Stevens, Suzanne Summers, Frankie Avalon, William Shatner, Ed McMahon, Dick Clark and Ivana Trump.
Kellie created her own multinational selling skin care brand, Kellie Olver Skin Care, from concept to completion, selling on ShopNBC and found in Luxury Spas and Hotels overseas.
Due to overwhelming demand, Kellie has just completed an information/how to course: Home Shopping 101: Everything You Need to Know to Get Your Product, Idea or Invention To A Shopping Channel And Be Seen And Purchased By Millions