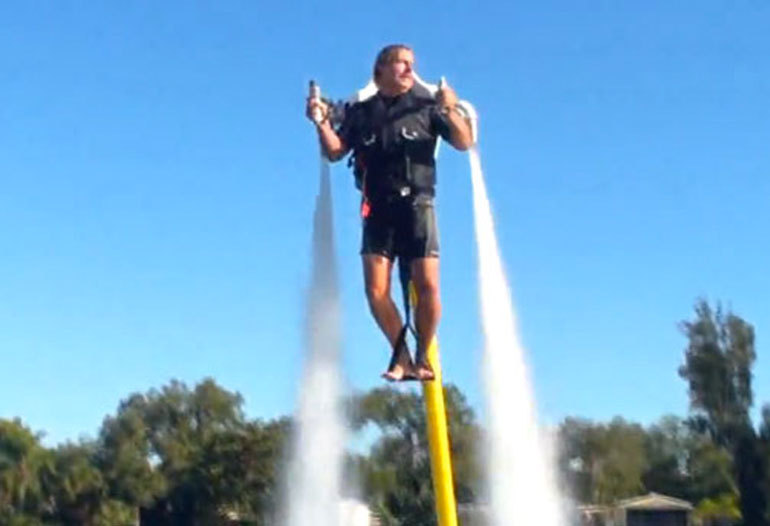 Ray Li has often had flying dreams in his childhood and youth. In those dreams, he could will himself to lift off the ground and levitate over people and objects. Or he would leap from the top of a long flight of stairs, and glide down hundreds of steps without touching the ground. It was only many years later that he learned that almost one in three people have flying dreams.
In 2000, a chance encounter with a watercraft rental operator in Newfoundland would change his life forever. While riding, he was surprised by the amount of thrust from the small engineand jet pump and decided to investigate the possibility of “flying” with controllable water jets as an amusement park ride. After some research and experimentation, he proved that the idea could work but could not find a solution to control the thrusts and other forces for controlled flight. The project was shelved.
After two years and several design iterations, the first prototype was completed and built in late 2004. In January 2005, it was successfully thrust-tested at Canada’s National Research Council’s Institute of Ocean Technology in St. John’s, Newfoundland. Afterwards, testing had to be moved to the warmer climates of South Florida to allow for year-round testing. The first manned flight took place on March 5, 2005, when the jetpack was already demonstrating great stability. Many revisions later, the first servo controlled working prototype was built and demonstrated in October, 2008. Finally, the first production prototype was completed and demonstrated in March 2011.